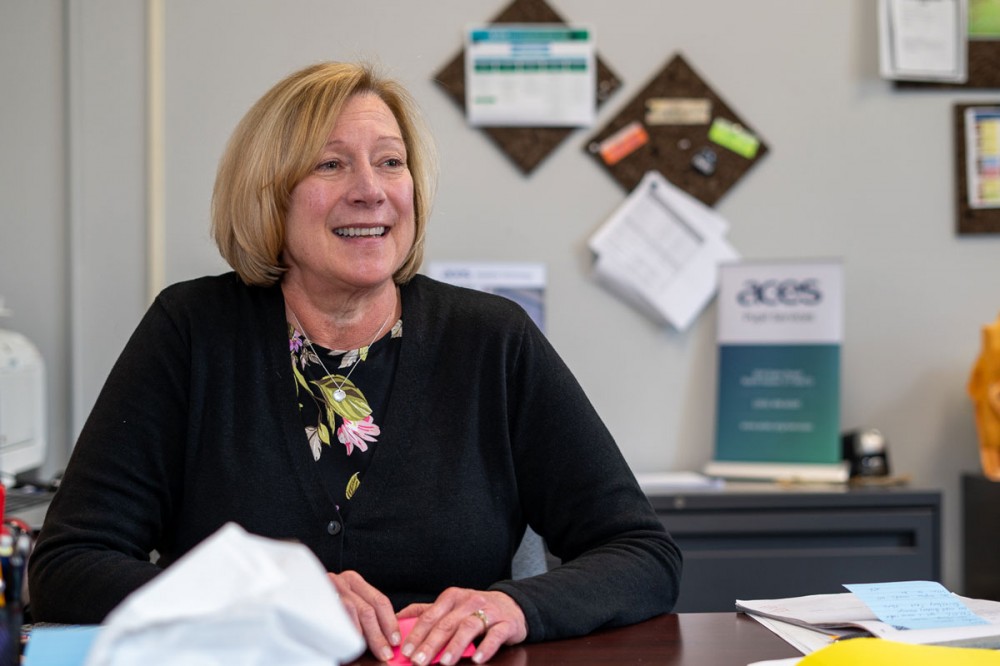 ACES Vanessa Taragowski Talks Life on the Rez, Retirement, and the Journey Ahead 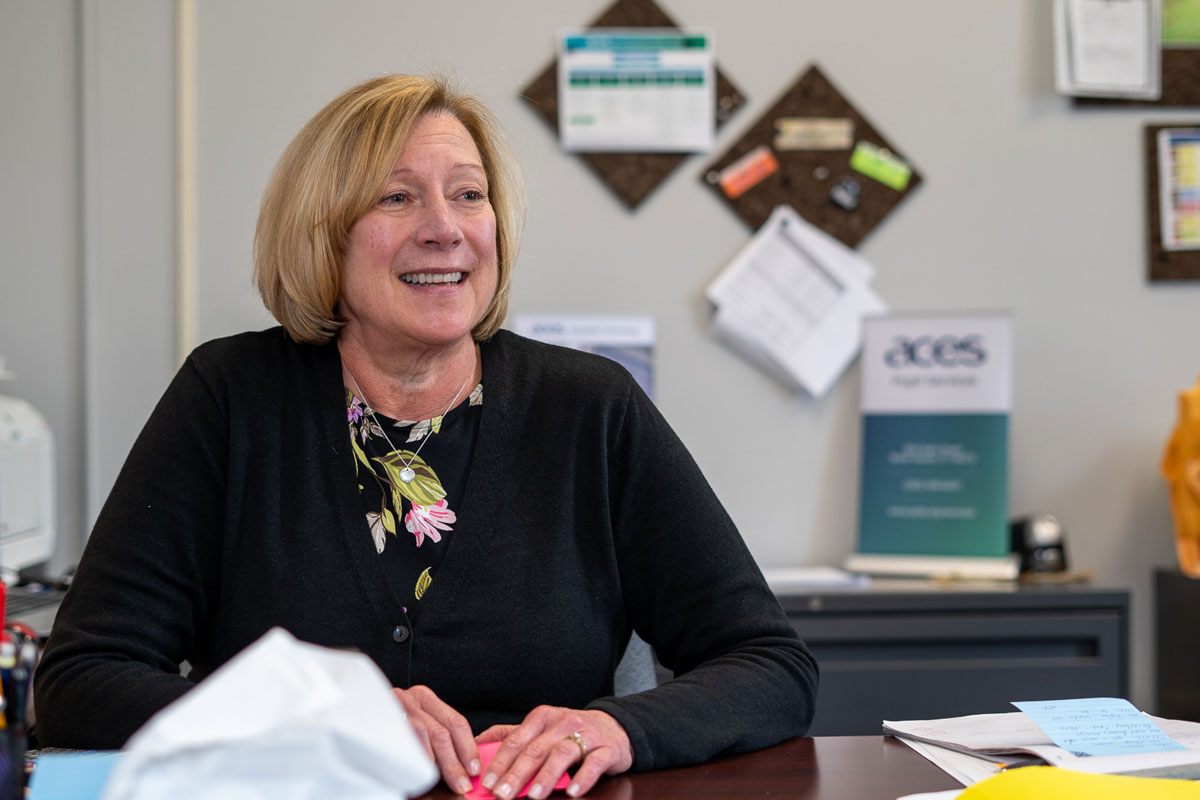 On a rainy morning in the last days of spring, her retirement only days away, Vanessa Taragowski is working feverishly in the hidden corner of ACES Technology Services in North Haven, CT. As someone who enjoys anonymity, being the center of attention is the last thing on Vanessa’s mind. “We’re not recording this, are we?” she asks only half-joking as we sit down for an interview. “Because I can’t be held responsible for what I say next,” she adds with a devilish grin. It’s the kind of sly, world-weary humor that comes from decades of working in education.

From Connecticut to North Dakota (and Back)

Helping others has always been Vanessa’s calling. At the age of 13, she fondly recalls babysitting for a child with down syndrome and wanting to make a career of working in Special Education. “I never thought about doing anything else,” she says after a thoughtful pause.

At age 21, her passion for people inspired her to accept a position as a Special Education Teacher for Turtle Mountain Community Middle School in Belcourt, North Dakota—just shy of the Canadian border. Her mission: to keep folks safe, sound and educated. She recalls the culture shock of flying halfway across the country to the Turtle Mountain Reservation, home of the Chippewa Tribe. “I had only a backpack, sleeping bag, pillow, and a floor. And I was happy,” she says nostalgically.

Through programs offered on the Reservation, she was able to study Elementary Education (K-6) and take graduate-level courses from the University of North Dakota. She later returned to Connecticut to work as a Residential Manager at the Kennedy Center in Bridgeport; a Special Education Teacher and Coordinator of Pupil Services at Boy and Girls Village in Milford; and a Resource Room Teacher and Dean of Students at East Shore Middle School in Milford. Despite this, she still misses her friends from the Reservation. “Some of my closest friends are still out there,” she says.

Vanessa joined ACES in 2003 as the Supervisor of Special Education and became the Director of Pupil Services and Collaborative Programs shortly thereafter. The department has grown exponentially over the years, encompassing Assistive Technology, Occupational Therapy, Physical Therapy, Psychology, School Counseling, Social Work, Nursing, Speech/Language, and more. 16 years later, she still enjoys it. “I love that every day is different,” she says.

But the position is not without challenge. “There’s a lot of people who don’t understand the breadth and depth of the department,” she explains. “We’re developing programs, helping our magnet schools, advising on restraint and seclusion policies and Physical Therapy guidelines, holding focus groups, and working with the RESC Alliance—like our recent Communities of Practice initiative. Every district is different, and it’s a different challenge for each one.”

Thankfully, Vanessa enjoys a good challenge. “Don’t tell me I can’t do something,” she laughs. The secret, she says, is to treat each program like one of your children—each with its own needs. One program, in particular, holds a special place in Vanessa’s heart—the ACES West Haven Collaborative program at West Haven High School, which provides educational services to students identified with intellectual and other disabilities. “Everybody just embraced these kids. The principal and the coaches were so invested,” she says. “I’m proud that we were able to develop such a high-caliber program without losing ACES’ identity in the process.”

Preserving ACES’ identity and legacy is important to Vanessa. To her, the agency’s responsibility to children is much more than an organizational mission statement; it is a core, personal belief. “We can’t lose sight of what we’re here for,” she muses. “It doesn’t have to be about the bottom line. It’s about the kids.”

So, what will retirement look like for Vanessa Taragowski? Although she’ll be returning this summer to help out, Vanessa hasn’t ruled out volunteering down the road. “It’ll have to be on my terms though. Maybe when the weather is good,” she jokes. For the rest of retirement, Vanessa is still working out her new routine. “I want to try to take daily walks at Silver Sands (in Milford) with my adorable pup, Mack, visit the Harbor, get dinner downtown with my husband, Rob, and spend time outside on my deck by the pool.”

As for travel, she’s excited to go to Ireland and Reykjavik (Iceland). “Or maybe I’ll grab an RV and head out west to visit friends in North Dakota, Coeur d'Alene or Palm Springs,” she smiles. “I don’t know yet.”

Wherever her journey takes her, ACES will never be far from Vanessa’s thoughts. “I’ll miss the people,” she calmly exclaims. “I was fortunate to work for schools and programs that were invested in the provision of services focused on improving the lives of children and adults. And along the way, I had great supervisors who supported and guided me in order to do so. They—along with my staff and students—are the reason I have loved working in this field.”

“Take care of them,” she says tearfully, when asked what message she has for her successor. “I loved my job. I hope we find someone who loves it as much as I did.”

Due to COVID-19, and in accordance with the Governor's guidelines, all ACES Schools and Programs, and ACES ACCESS are closed through April 20, 2020.
ACES will then reassess the situation towards the end of this period to determine next steps.
Employees at ACES Central Office will continue to report to work per your supervisor's schedules.
All Fingerprinting Services will be postponed until further notice.

Grab & Go Meals are available to all ACES students, Monday-Friday, from 11:00 am - 12:00 pm. Pick-up is available at the dining halls at ACES Mill Elementary School in North Haven only. One breakfast and one lunch is available per child. See more details here.